Who has read “The White Tiger” by Aravind Adiga? Must thank @abheekthakur for lending me this. When I was younger, I found it difficult to read Indian authors. I found them strangely offensive to the senses and unable to relate to any of the characters or the plot. Between the ages of 16 and 25 I have read a lot of Indian authors including Arundhati Roy, Vikram Seth, R.K. Narayan, Jhumpa Lahiri (though she can largely be categorised as American) and now Aravind Adiga – and now hold a silent appreciation for Indian writers. There is a sentimental quality to their work which I find missing in almost all other authors (barring a few Middle-Eastern and Italian writers). What I find to be the classical distinction between Asian writers and Western writers is that the former focus heavily on the background of the central object/subject taking in “context” – it is a play on scenarios, a world painted in variations of greys. On the other hand, I find western authors – like the western philosophical epicentre – to be focused on the individual, a detail objective or subjective narrative built around the central plot/character – where the world is seen in black and white. I think this is very telling of how the Asian and Western people view the world, solve problems and co-exist. My recommendation is that if your reading background has had only a singular geographical/philosophical source, you must branch out because doing so can really help you differentiate between different mindsets, cultures and philosophical structures scattered generously around the globe. 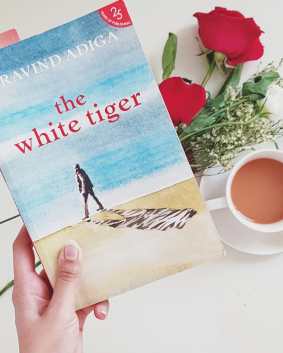 “I know something Carter never knew... or maybe you. I know what ‘nothing’ means."
#54321 Challenge:
I do not know how to use this account anymore. I have been reading and I have been writing (very academic and work related stuff, not for myself which has inevitably left a gaping hole in my soul somewhere but is currently cosmetically covered with excuses, caffeine, TV shows) and I have been studying and stress-working. Before all this I was travelling in Europe. Before that, I was studying and working and was slowly reaching burnout. Europe was fun and it revived me in a thousand ways till I was back and immediately thrown into a whirlwind of crises management, fighting crocodiles, damage control and meeting deadlines. Things have been good though, in general, because this brain has learnt to compartmentalise shit that comes with the lifestyle I naively chose, but one I am working towards making it work for me. Between all this, words seem to be in limited supply which is always frustrating, words that are being used up in writing 3000 word essays for uni and reports and emails for work. But really it is not words that have been failing me (for personal use i.e., I have been fairly proud of the shit I have been churning out for uni lately). It is the limited energy I have to engage, really engage with things that at one point fed me. Lack of engagement is making me bored, y'all. I'm bored. So back to that first sentence, I do not know how to use this account anymore. That's it, there really wasn't a point to this post when I made it. This is an automatic decision, almost. Word dumpy tra la la la
Efharistó
Things that keep me going:
Did you know I have two accounts on Instagram, a public one that you’re now on and a private one limited to close friends and family? I suspect a lot of people on bookstagram and other professional/niche spheres do the same thing. I also suspect that we do this, atleast generally speaking, for the same reasons. So there really isn’t a point to this, except that it is a lingering thought that I haven’t voiced so here it is being put in digital ink. One of the reasons I think this thought lingers is because I do know many for whom their primary social media face is the public one, or the only one. And even though I think nothing special and/or definitely nothing negative of it, I do occasionally feel awe, sometimes confusion, and sometimes jealousy. The jealousy, I suspect, is around how integrated their representations of themselves must be. I cannot help but wonder if that stems from having lesser constraints and hence, less consequences, towards a well-rounded self-presentation. That jealousy dissipates when I think about certain moments that I hold close and want to share, but intimately with people I trust, those I know well and those whom I don’t but would like to. The confusion, however, does not really dissipate. How does that work for you, having a public face (only), sharing all that you do into one sphere? What entitles you to that level of safety? Or how have you constructed those illusions of safety for yourself, and what do those illusions look like?
Loading Comments...